Liquefied Natural Gas: Everything You Need to Know

If you’re interested in learning more about liquefied natural gas (LNG), you’ve come to the right place! Here, we explain what LNG is, how it’s created, and why it’s so popular among businesses looking to reduce their carbon footprint. For more information on LNG, give our contact information a look at the bottom of this page or contact us today!

What is liquefied natural gas?

Liquefied natural gas, or LNG, is a type of natural gas that has been cooled and condensed into a liquid form. This process makes it easier to store and transport LNG, and it also makes it less flammable than traditional natural gas. It’s estimated that the use of LNG could cut greenhouse gas emissions by up to 20% when compared with other fossil fuels like coal and oil.

LNG is safe when handled properly. That’s why there are comprehensive LNG project management systems in place, designed to ensure the safety of people, communities, and the environment.

LNG projects must undergo thorough reviews by many agencies, including federal regulatory bodies like the Federal Energy Regulatory Commission (FERC). The federal guidelines for LNG projects follow the National Environmental Protection Act (NEPA), which consists of exhaustive studies on potential impacts to safety, the environment and the surrounding communities. It now includes a review of carbon emissions. Once construction begins, specific agencies review and monitor construction practices.

Are there any safety concerns with LNG facilities?

LNG is natural gas that has been cooled to -260°F, at which point it becomes a liquid. This process makes it easier and cheaper to transport natural gas over long distances. Safety concerns with LNG facilities are minimized through the stringent reviews by federal, state and local regulatory agencies. LNG is not easily flammable in its cryogenic state and when it does ignite, it results in a ‘lazy flame’ and does not typically result in explosions.

How do LNG facilities respond to spills and leaks?

LNG facilities are designed to contain and control any spills or leaks that may occur. In the event of a spill, the first priority is to stop the flow of gas. Once the gas is shut off, the next priority is to prevent the spread of the spill. Secondary containment systems, like dikes and berms, are used to contain any spilled LNG. Finally, specialized equipment is used to clean up the spill and return the area to its original condition. While these measures have been successful in preventing significant environmental damage, accidents can still happen. These incidents have occurred at production plants as well as at storage terminals. The severity of such accidents depends on where they happen and how much gas was released.

Can we use other gases as a substitute for LNG in vehicles, power plants, or households (e.g., propane)?

Yes, other gases can be used as a substitute for LNG in vehicles, power plants, or households. Propane, for example, is a common substitute for LNG. However, there are some important differences between these two gases that you should be aware of before making a decision. For instance, propane has less energy density than LNG does. In addition, propane costs more than LNG does on an energy-equivalent basis because it takes more propane than LNG to produce the same amount of heat or electricity.

How can I learn more about liquefied natural gas production?

A good source of useful information regarding LNG can be found in the Center for LNG (https://www.lngfacts.org/) website. You can also contact us to discuss further.

How is liquefied natural gas made?

Liquefied natural gas (LNG) is natural gas that has been cooled to a liquid state, at about -260° Fahrenheit, for shipping and storage. The volume of natural gas in its liquid state is about 600 times smaller than its volume in its gaseous state. This process makes it possible to transport natural gas to places pipelines do not reach.

How is liquefied natural gas transported?

Liquefying natural gas is a way to move natural gas long distances when pipeline transport is not feasible. Markets that are too far away from producing regions to be connected directly to pipelines have access to natural gas because of LNG. In its compact liquid form, natural gas can be shipped in special ocean-going tankers (or road tankers) to terminals around the world.  At these terminals, the LNG is returned to its gaseous state and transported by pipeline to distribution companies, industrial consumers, and power plants.

How is liquefied natural gas re-gasified?

To use the LNG as fuel, power generation, for heating, cooking etc., the LNG must be converted back to gaseous state. Typically, this process takes place at large import terminals where LNG carriers discharge their LNG cargo. At these terminals, the gas is stored at liquid state in tanks, and re-gasified before it is transferred as natural gas to the end user through a pipeline gas network. Alternatively, the LNG can be transported further by truck, rail or smaller ships and re-gasified closer to the consumers. A regasification plant can use a heat exchanger with sea water as heat medium to increase the heat of the natural gas to change it from liquid to gaseous state. Air vaporizers can also be used where several large fans that push air through heat exchangers to vaporize the LNG. In periods of high demand, regasification might also be accelerated using underwater burners running on natural gas.

What is liquefied natural gas used for?

Once LNG is re-gasified, it can then be injected into natural gas pipelines, to be transported to homes, businesses, industrial facilities, power stations and more. LNG is a popular fuel option for power generation because it is a clean-burning fuel that produces much fewer carbon emissions than other fossil fuels line coal or oil. Many power plants use LNG as a backup fuel because it can be stored cost-effectively onsite in cryogenic tanks. When demand for electricity peaks, LNG can be converted back into its gaseous form for generating electricity.

Natural gas, once it is re-gasified from its liquefied state, is the same as pipeline natural gas. It is non-toxic (non-poisonous) but can cause death by suffocation in a confined space. Natural gas is lighter than air, so will rise if allowed to escape from a burner or loose fitting. Utilities typically add odorant to natural gas in distribution lines to allow early detection of any leaks.

Natural gas is a naturally forming fossil fuel, consisting mainly of methane (CH4), normally produced through the drilling of wells. Renewable Natural Gas (RNG) is natural gas that is produced through carbon neutral processes. There are three main ways that RNG is produced. The first is anerobic digestion, which converts wastes (such as cow manure) into biogas. The biogas is then processed to become pipeline quality natural gas that can be comingled with natural gas in pipelines. Another method is the gasification of biomass, which produces a syngas that is then converted into methane for injection into pipeline systems. RNG is also produced from organic waste at landfills, where it is collected, treated and then injected into pipelines.

How are liquefied petroleum gas and liquefied natural gas different?

Liquefied natural gas (LNG) and liquefied petroleum gas (LPG) are both clean energy sources. Both mixtures are composed of gases in natural state but are then converted into liquid forms for ease of transport and storage. LNG consists primarily of methane, while LPG consists of a mixture of propane and butane. LNG is lighter than air and LPG is heavier than air.

Which countries are the biggest exporters and importers of LNG?

In the recent past, LNG was primarily exported from the Middle East (Qatar) and Australia. With the war in Ukraine and Russia cutting off natural gas to Europe, as well as the construction and commissioning of large-scale LNG export projects in the USA, LNG exports from the USA have begun to dramatically increase. 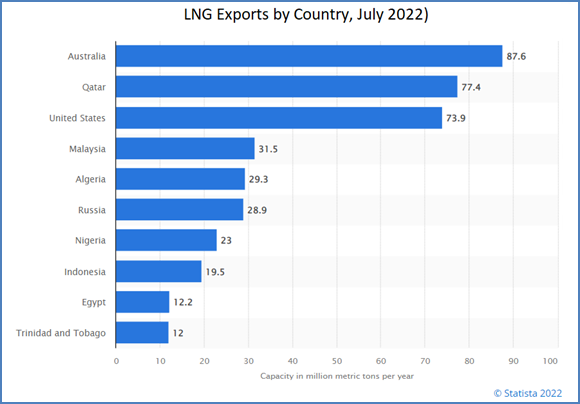 What is the role of LNG in the gas supply market?

LNG is a cost affordable and very safe method of transporting natural gas over long distances to global markets where natural gas is not plentiful or available.

Is liquefied natural gas a long-term energy solution?
LNG will continue to be a major source of clean energy for the world, helping in the transition from more contentious fossil fuels such as oil and coal. It burns much cleaner than these fossil fuels and works well with renewable power such as solar and wind, providing backup power when the wind or sun is not available.